Thoughts from the Cracker Barrel Rocker 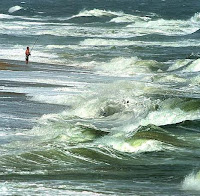 There are a lot of things that just don't make sense to me. But, as I have grown older - and hopefully wiser - I have come to a sobering realization: I don't need to completely understand everything to accept it.
I thought about this yesterday afternoon as I sat on the front porch of my house reading a book. Several times I was ditracted by the sound of the 40 MPH wind knocking the branches of trees against each other. I would look up every minute or so and see something both awesome and terrifying - 150-foot oak and poplar trees being tossed around as if they were toothpicks.
I looked from my far left to my far right and just took it all in. I had just left my brother-in-law's house, where a 100-foot poplar had been uprooted earlier that afternoon and thrown down on the driveway. I said a little prayer and asked God to protect our family and our neighbors from harm. From where I sat, it looked as though dozens of huge hardwoods would be snapped in two at any moment.
Then I thought about the reports of death and destruction from areas south of Atlanta, where the severe winds devastated families and communities. I realized that my prayer held significance in God's eyes, but I also knew that my family - and my house - were not immune to the damage that winds and falling trees can cause.
I thought to myself, "God Himself is controlling the wind. This isn't a drunk driver being irresponsible and getting behind the wheel of a car. This isn't a football player getting hit in his spine, causing paralysis. This isn't a homicidal maniac weilding a gun. This (the wind) is not controlled by man. This is completely in the hands of my Creator."
The thought did two things. For one, it calmed my spirit to know it was completely in God's hands. And two, it made me remember that when I decided to make God the Lord of my life, I surrendered to Him, no matter the circumstances.
God knows we have questions. Tough questions. Questions that keep us up an night, and ones that often cause a great deal of uncertainty. But, God asks us to trust. Not to fear, but to trust in Him. Through death, destruction, injustice, malice, hardship, rebellion, unrest, isolation, and anything else that causes us to ask "Why?"
Jesus's brother, James, had some things to say about not putting our complete trust in the Lord:
Anyone who doubts is like an ocean wave tossed around in a storm. If you are that kind of person, you can't make up your mind, and you surely can't be trusted. So don't expect the Lord to give you anything at all. James 1:6-8 (CEV)
Pretty harsh words, but they are right on the money. If we are like ocean waves, being tossed around in a storm, it means we are not grounded. It means we allow our circumstances to dictate our actions and emotions. It means we are inconsitent. Hence, that is why we cannot be trusted.
It's an all or nothing deal. You either trust God, or you don't.
I choose to believe. How about you?
Posted by Unknown at 4:06 PM