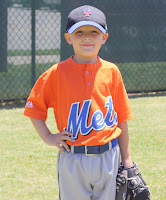 If someone offered you the opportunity to stay the same age, and never grow older, you’d take it, right? No strings attached, no selling your soul to the devil, no caveat. Just accept this offer, and no more. I would!
But, for some reason, my kids won’t accept this deal. Every so often, Amy and I will say the following to our now 10 and 6-year old sons: “No getting bigger or older, OK? Just stay this size and age forever. Is that a deal?”
They don’t even consider it. They immediately shoot this idea down! They’re in a hurry to grow up, while we (adults) are desperately swimming upstream against the painfully swift current of time.
Father’s Day has just passed, and as I think about being a dad, I am overjoyed. I never knew exactly how fulfilling a role that Fatherhood would play in my life. And, I never knew how quickly the days, weeks, and years would fly by. It’s moments like these when I have to take a big breath and try not to think about what li

fe will be like without my boys in the house every day. Deep breath.

I understand that my kids are “only” 10 and 6, and that I have several years to go before they are out of the house. But, that is little consolation when I can already see so much in the rearview mirror. After next year, one of them will be in middle school. Yikes!
There’s a laundry list of things I get to do with my kids that will vanish in the years to come: reading bedtime stories, kneeling and saying prayers together before turning out the light, practices and games at the ballpark, homework and school projects, shooting hoops in the driveway, playing on the playground, hearing that lovable “kid laughter” throughout the house when they are playing nice together, Disney World vacations (OK, maybe not Disney – we’ll never outgrow that!).
And, with each day that passes that list grows longer, and my time with them becomes even briefer. So, what can I do about it? How can I preserve this time and squeeze out every last drop? Simple: I continue being their dad.
What I mean is this: instead of lamenting the fact that they are growing up too fast, I continue to do what I have been doing. Some parents get to a point where they cease being their kids’ parents and try too hard to become their “friends.” They ease off the brakes and allow their kids to hit the accelerator. “I don’t want my kids to grow up hating me,” some parents say to themselves. So, they do the very thing that will result in their kids losing respect for them – they stop parenting.

I remember hearing some sage advice several years ago from a guy at our church. His sons and daughter are now in their late 20’s and early 30’s, but as he reflected back on his life, he made this comment: “I made the decision to be their parent and to make tough choices and to discipline them when they were young, so I could be their friend when they got older.”
So, that is what I will do. I will cherish these precious moments, but I will be relentless in my role as “Dad” to disciple them, lead them, encourage them, correct them, and love them.

And, in the end, I believe God will honor this, and will bless my boys and me with an incredible friendship for decades to come.
Now, THAT is a deal I can’t pass up!
Posted by Unknown at 9:18 AM No comments: Links to this post

By Default, or By Design?

I wouldn’t classify myself as “control freak,” but in many ways I do want to have a say-so in what I am going to do, and how I am going to do it. I guess the fact of the matter is that I ultimately trust myself more than I trust someone else to determine my path. But, not only my path – my kids’ paths as well.

I’m going to get straight to the point. I believe one of the major problems with the world is that we have a bunch of scaredy cats running around with no idea where they are going. There’s no target they are aiming for. No goals to be accomplished. No process in place to get them or their families where they need to be – financially, emotionally, spiritually, or physically. These are the people that just let life “happen.”

Priorities are out of whack all around us. It can be sickening. We can make just about any decision seem like the right one, can’t we? We rationalize. But, as Rick Warren once said, when we rationalize, we are feeding ourselves a “ration of lies.” Parents choosing their jobs and financial “security” over their kids or spouse. Kids choosing a false sense of acceptance over doing what is right, what is best. Business owners choosing the almighty dollar over consumer and employee loyalty.

Several weeks ago, a friend of mine was speaking at church. He made the following comment: “It takes no effort to drift.” When you jump into the ocean, splash in the waves, and hop on the boogie board, where do you end up? Usually, you wind up 40 or 50 yards down the beach from where you entered the water. And it takes a ton of effort on our part to fight the current that pulls us away.

It’s no different on land in the “real world.” We have to plant our feet firmly into the ground and take a stand. We have to be intentional with every move, every step. If not, we drift. And, the further we drift, the less likely we are to fight our way back.

Many have no sense of purpose or mission, and lack any direction at all in their lives. Generally, these people “want” certain things – to become wealthy, to be a good mom, or to work in a certain profession. They stand at Point A, occasionally dreaming about Point B, but lacking the discipline and initiative to ever make the necessary changes to get to their preferred destination.

It’s why people don’t put away money for retirement. They choose to spend what they earn here and now, sacrificing their futures all the while. They have this idea that one day they will take it easy, travel, buy a vacation home. But how? It’s no wonder that nearly 1/3 of Americans’ current retirement plan is to “win the lottery.”

Perhaps you have a vision for your kids to really become something special one day. You want them to be well-educated, have impeccable manners, be physically fit, have a profound impact on others. In order for you to help pave the way for 20 years into the future, you’ll need to make some changes now. You’ll have to scrutinize and alter the TV shows they watch, who they hang out with, the types of music they listen to, the way they talk to others, the way you talk to them, what they wear, what they eat, how much effort they put into their studies. If your son listens to heavy metal, stays up until 1 a.m. watching WWE wrestling, talks back and shows disrespect, looks like a slob, eats and drinks whatever he wants, and rarely studies, you can probably guess where he’ll end up in 10-20 years. And, in order to prevent that, you’ll have to do the tough things now.

Otherwise, you’ll continue to drift – and so will he. So, choose to live your life by design, not by default. Your future – any probably others’ – hangs in the balance.
Posted by Unknown at 10:48 AM No comments: Links to this post