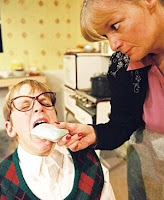 But, as effective as the deterrent was for me personally, I get the feeling that tactic didn't work too well on many people. Let's face it - cursing, profanity, foul language, 4-letter words - whatever you prefer to call it - it's all around us. And, to be perfectly frank, I loathe it. It truly upsets me. It makes me cringe. But, more than anything, it saddens me.

Now, I am not talking about what comes out of your mouth when you hit your thumb with a hammer. I'm talking about people using foul language in casual conversation, or even in a professional setting. It just baffles me.

Our family recently was on a flight, and there was a group of men on the plane who were headed out west for a hunting expedition. A few of them were seated in the row behind us and got to talking. Before I knew it, expletives were flying out of this one dude's mouth left and right. I finally turned around and hit the guy's boot with my hand and asked him to watch his mouth. He apologized, but I got the feeling that I put a damper on his story since he felt he couldn't use 4-letter words.

I also recall a trip to the beach back in September. I was disturbed one afternoon when I heard a 12-or-13-year old boy repeatedly using the "f" word - and he was hanging out with three girls his age. Nothing says "I think you're hot and I want to get to know you better" like the "f-bomb." I was about to say something to him, but he walked out of the ocean and disappeared.

I hear stories from others who work in places where bad language is the standard - even in meetings with other teams of executives from outside companies. I've been told that those who are offended by this are reluctant to speak up because they are in the minority and are afraid it could hurt their career. How crazy is that?

Believe it or not, I have had debates with other Christians who feel like cursing is no big deal. If it was not a big deal, would James (Jesus' brother) have penned these words?

With the tongue we praise our Lord and Father, and with it we curse men, who have been made in God's likeness. Out of the same mouth come praise and cursing. My brothers, this should not be. Can both fresh water and salt water flow from the same spring? (James 3:9-11)

And, for the record, there are many times in the Bible where we're told not to use foul language and obscenities - read the Book of Proverbs, Ephesians 5:4, Colossians 3:8.

In the end, I suppose I just don't see the need for it. One of the best quotes I have ever seen appeared in Reader's Digest a while back. I do not remember the author, but it said this: "No one has ever sounded more intelligent by using foul language." That is the truth!!

I think it's time we put the bar of soap back to use!
Posted by Unknown at 8:48 AM

I ate plenty of soap in my childhood. I see the same thing that you do. Words that were once taboo are now said by almost anyone. The thing that bothers me is Christian cussing, crap, shoot, sucks (all of which I use.) Is it possible that it's more than the word, it's also the motivation for using it. What do you think?

Cussing has never been a part of my life, so I have no idea what kind of "motivation" one would have for using foul language. It really boggles my mind. I think teens do it to "be cool" and fit in, but I have no idea why 50 and 60-year old men and women feel the need to use filthy language. It's classless and tasteless, if you ask me.

As for "sucks" and "crap" and the like, that's a different subject. I think you're right about the attitude with which words are spoken. I don't see any problem with the word "shoot" or "darn," but "sucks" is inappropriate most of the time.