Nothing Normal about Christmas 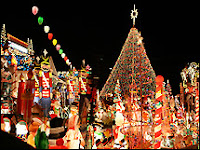 Think about this. If you were an alien from another planet and you happened to visit Earth between Thanksgiving and New Year’s Eve, what would you think?


You’re flying around and you see multi-colored light displays on the vast majority of houses and lawns. You see wreaths on windows and doors. You see these perfectly cone-shaped green objects adorned with icicles, bulbs, shiny balls, angels, candy canes, and other various objects of sentimental value. You see hundreds of plump men wearing suits of red posing for photographs with screaming children all day long. You see millions of boxes pristinely wrapped in festive paper and placed under and around the aforementioned decorated green cone-shaped object. You hear joyful songs. You see smiling faces (everywhere except in retail stores). The scent of fresh spruce or perhaps warm gingerbread or cinnamon fills the air.

If you came to Earth between Thanksgiving and New Year’s Eve, what would you think?

On the surface, all of these Christmas traditions seem quite preposterous. Silly. Goofy. Downright weird. But, Christmas is not a normal time of year. Not by a long shot.

Christmas is a time of year when the focus is off of ourselves. We dream about ways we can create an unforgettable memory for someone else. We’re selfless. Downright cheerful.

What if we could live like this year-round? I’m not talking about having our Christmas lights up on our homes 365 days a year (if that’s you, the general rule of thumb is to take them down by New Year’s Day – FYI. If you’re going to leave them up, at least continue to turn them on each night). I’m talking about something much more profound: living joyfully.

Our greatest joy came to Earth 2008 (or so) years ago. And, there was nothing ordinary about that first Christmas, either. A virgin carrying the Savior of the world? This virgin riding a donkey for more than a week from to ? This Savior being born among animals? This Savior sending a special invitation to shepherds – the lowest of the low in society – to come to the birthday party of all birthday parties? Sounds preposterous. Silly. Goofy. Downright weird.

But, let’s back up a moment. Perhaps the most unusual part of this story hasn’t been mentioned. There’s another family involved here. There’s a Heavenly Father and his son. This Father loves his boy – his one and only - beyond comprehension. But, He is going to saying goodbye to Him. But, this is not your typical “see you later.” The Father knows what this means. He knows the torment his son will be subjected to. The mission that has to be fulfilled. The punishment he’ll endure. The mocking. The aloneness. And, his heart is broken.

But, this Christmas story doesn’t end here. It only begins. Because the same sorrow the Daddy feels is overcome by the pleasure he receives by his son’s actions. By his son’s words. By his son’s willingness – eagerness – to honor his Daddy.

Why would a Father send his son to Earth only to die? Because this isn’t a normal Father. Because this Father’s love for his very own son is matched only by his love for his other children – that includes me, and it includes you, if you have trusted in Jesus as your Savior.

Christmas isn’t normal. Not even close. And, if it ever becomes ordinary or routine, we’re missing out on the greatest gift ever. A gift we could never earn. A gift that only the best Dad in the world could give.