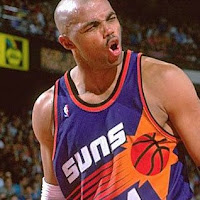 If you know who Charles Barkley is, you are not at all suprised that the guy makes some pretty outlandish statements. He loves the camera, and isn't afraid to create a stir.

This election year is no exception, as Sir Charles recently made some pretty bold statements on CNN. You can watch the interview yourself HERE.

This is actually rather timely for me. I just finished reading unChristian, by David Kinnaman and Gabe Lyons, which points out six unflattering perceptions that "outsiders" of the Christian faith hold towards people who call themselves Christians.

What are your thoughts on Barkley's comments?
Posted by Unknown at 2:57 PM

There are certainly "Pharisees" around now just as there were in Jesus' time and we know what Jesus' opinion of them was.

There are plenty of genuine Christians as well. They are too busy loving, serving, and forgiving people to be judging them. I don't think these are the people that Barkley is complaining about.

As for his complaints about conservatism, I believe he is probably complaining more about neo-conservatism (a la George W. Bush, Dick Cheney, et al) and not traditional conservatism. To me, a neo-conservative is little more than a liberal in conservative drag. They are the proverbial wolves in sheeps clothing. I don't care for them any more than Barkley does.

For an example of a traditional conservative, google Ron Paul. It is not necessary to be a hawk to be a conservative.

I don't like what the Republicans have done while in power any more than Barkley does. They richly deserved to lose control of congress in 2006. When they came into power in 2004, they were going to change Washington, but Washington changed them.

That is not to say that I think the Democrats are any more deserving of power. They are equally to blame for our problems.

As for gay marriage, God established marriage as a covenant between a man and a woman. How in the world did the state ever get involved in deciding what a marriage is anyway? I have nothing against homosexuals. We as Christian are called to love, serve, and forgive all people.

As for Barkley being elected governor of Alabama in 2014? He doesn't have a prayer!

Republicans gained control of congress in 1994, not 2004. My fingers typed the wrong decade.