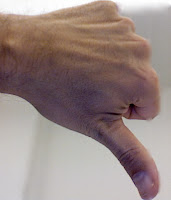 OK, I have a confession. I really need to heed the sage advice I am about to espouse to those of you reading this. I am a critic. I am always analyzing things and trying to identify weaknesses. Chinks in the armor. The Achilles heel of that which I am judging. It’s a curse in many ways.

I have really tried my best to improve in this area. I, like you, am often times more concerned with inflating my own ego, and less concerned about the damage my words and opinions cause to others. I like to appear smarter than I really am, and I especially enjoy it when you appear vulnerable. It makes me sick to even admit this, but like Metallica once sang, “It’s Sad but True.”

And, I do these things because somehow I feel threatened. If things are changing around me, I may opt to launch an offensive to suppress what you hope to achieve. The good you are trying to do. The lives you are really wanting to affect.

I am selfish. I can take you down in a variety of ways. I can make a snide remark to make myself feel better and undermine all the hard work you and your organization have put in. I can gossip to try to get people in my corner. Or, I can discourage you to the point of giving up. Because, often times that is exactly what we want, isn’t it? We want to dash people’s hopes and dreams.

I have been studying the life of Nehemiah, and reading a fantastic book called Visioneering by Andy Stanley. You see, Nehemiah had a vision that came from God. The vision was to rebuild the city walls around . He wasn’t even living in , but when he heard that the walls had been torn down, his heart ached. He prayed, fasted, and waited patiently for God to speak to Him. And, when God answered, He placed on Nehemiah’s heart a burden to rebuild walls that had been destroyed 90 years earlier.

But, Nehemiah’s task was not easy. He had to find favor with the king (his boss) to go and begin the work. He had to secure the resources to do the job. He had to recruit thousands of demoralized Israelites to help him with the task. But, more than any other obstacle he faced, perhaps the most dangerous to the vision were the critics.

None of ’s surrounding countries were too upset at the condition of the walls. They knew that without fortification, posed no threat. But, when Nehemiah came on the scene, that changed. The Israelites had new life. They had hope. They were pumped.

That’s when the critics typically come on the scene. When they feel threatened. And, that’s exactly what happened here. Outsiders began to discourage the people. They said rebuilding the wall was impossible. They criticized the workmanship of the wall itself. And, finally, they threatened to attack from each side if the building of the wall continued.

But, Nehemiah re-cast the vision to the people. He stood firm. He refused to come down from the wall. He remained committed to God, and to the vision God had given to him.

And, that’s what we have to do when we’re criticized. We have to stand strong and be confident. We have to rally the troops. And, we have to prepare ourselves for attack – all while staying focused on seeing the dream through until the end.

So, we each have a choice to make here. We can be critics and cowards, or we can be teammates. We can push back against those trying to make a difference, or grab the rope and help them pull. As I heard someone once say, we can either use rocks to hurl at people, or use bricks to build them up.

Resist the urge to be critical. Instead, do all you can to help others achieve something positive. You never know…you just may catch the vision yourself!